Second Avenue was delighted to participate in this year’s ED Games Expo, sponsored by 1776 and the Entertainment Software Association! After all, everyone loves a good “game night” from time to time, right? (In our office, when we finish our writing, designing, coding, and testing for the day, many of us play Super Mash Brothers, a vintage game like Street Fighter, or even old school board games – they help us think about our own designs). The ED Games Expo was like a game night extravaganza, with attendees not only playing games, but also meeting the developers.

A science teacher’s jaws dropped when he saw 3D molecules floating over the table. Not only did we have a blast checking out some of the unbelievable new products of our fellow Ed Gamers, we had a chance to play our own games with all kinds of awesome people: an electrical engineer “geeked out” over a level in Martha: Forces, a policy analyst for the White House spent 25 minutes playing with the election history in our Voter’s Ed app, and a science teacher’s jaws dropped when he saw 3D molecules floating over the table in our augmented reality chemistry game. Best of all, of course, were the moments when kids played our games (and adults crowded around to watch them). We were thrilled to receive an unofficial “best game” nomination from two nine-year-old girls, who themselves proved to be excellent game designers inside Martha’s “Freeplay” maker space.

The Future of Educational Technology With so many great people and products in the room, there was tremendous, positive energy and optimism about the future of educational technology. Though everyone in the field is facing similar issues with commercialization, we also agree that this an incredible space in which to work and play. A special shout out to Dr. Ed Metz and Dr. Glenn Larsen, our grant program officers who never tire in their efforts to help us with these issues and promote educational and serious games. Thank you for a marvelous event, and we look forward to next year! 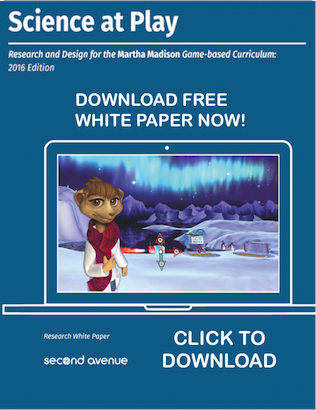