Origins - A 5th Guided Tour for Voices for Suffrage 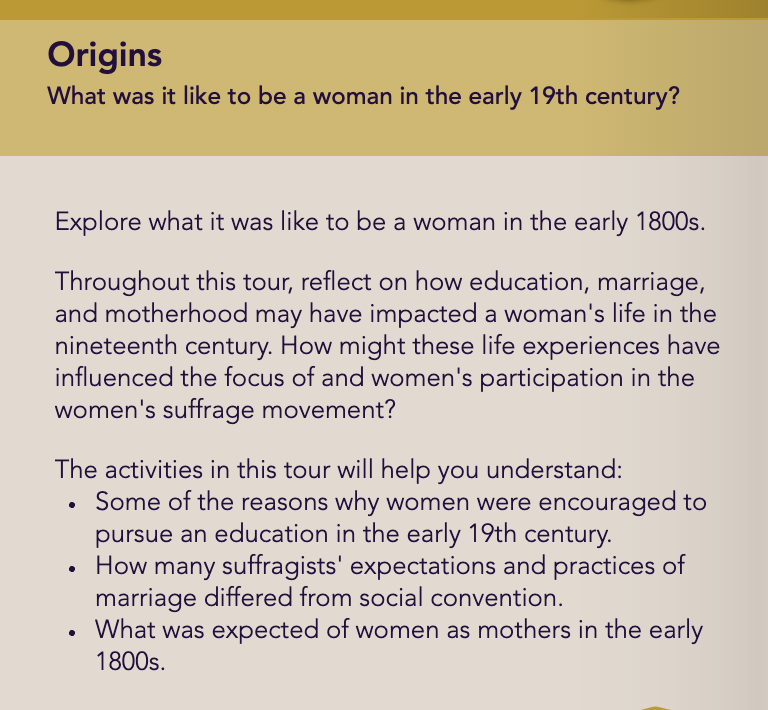 We are pleased to announce the release of “Origins,” our fifth Guided Tour on our Library of Congress funded Voices for Suffrage web application. Guided Tours are 20-minute guided lessons including videos and interactive activities to teach a specific piece of the movement.

The Origins guided tour was created to cover the time period leading up to the Seneca Falls Convention in 1848. The tour addresses women’s education, marriage, and motherhood, which were important aspect of many women’s lives where there were clear disparities between the expectations of men and women. These disparities illustrate why women wanting the vote was viewed as radical and provides context that aids in understanding the arguments of anti-suffragists. In addition to providing context, this Guided Tour also allows students to explore different views about a woman’s role in society in the early 1800s, including views that were considered progressive at the time, but today seem either obvious or outdated.

To access all five of our Guided Tours, go to the ‘Explore the movement’ section at https://voicesforsuffrage.com.

We would also like to give a huge ‘thank you’ to our amazing intern, Callie Slevin, who worked hard to create the Origins Guided Tour. You can learn more about Callie’s time at Second Avenue in her blog post Lessons Learned from Second Avenue Learning Interns: Callie Slevin.

Tallis Polashenski is one of our bright, young rock stars. She is skilled at everything from programming to account management, and is especially great at finding ways to brighten the days of our partner organizations and adding enormous value.